How to stop hair pulling with children? Treatment for Trichotillomania offers support. Blog post by mental coach & trainer teaching people how to cure hair picking and get their life back. 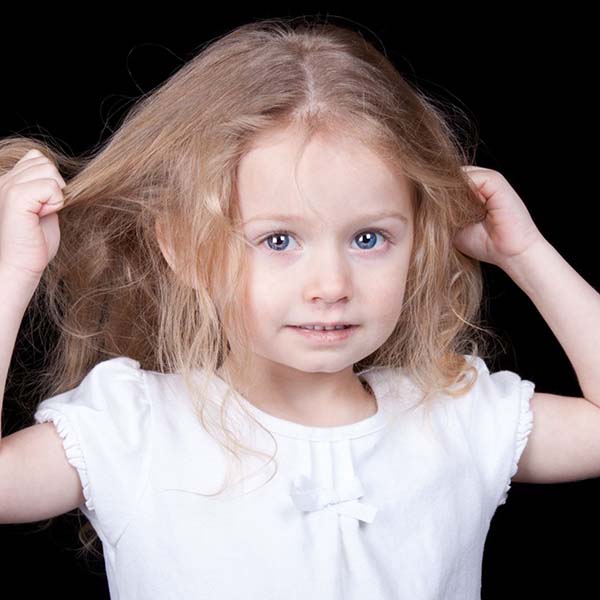 How to stop hair pulling with children requires a different approach than for adults.

Something I will briefly address in this blog post.

Now I know that with many people I offered treatment of trichotillomania for over the years, the compulsive hair pulling often started at an early age.

But what is remarkable is that most of them had grown into adults and suffered for many years from trichotillomania before asking for support and finding a cure.

Often because they only discovered later on in life that other people also pull out their own hair and there is actually an official name for this compulsive behavior: trichotillomania.

Offering trichotillomania therapy and helping people to set them free from this limiting behavior is wonderful work to do.

Helping them to make a change for the better sometimes brings tears to my eyes when they inform me about their progress later on.

But even more grateful is it when young people ask for support – often preceded by their parents – to teach them how to stop hair pulling and change their life for the better.

Offering trichotillomania treatment for children requires a special approach that is slightly different than working with adults.

Firstly because children are often very open-minded and will instantly do what you ask them to. Where some adults sometimes want to understand everything at first, a child on the other hand is often only interested in one thing: overcoming the urge for pulling out hair, it doesn’t really matter how!

With very few words and a lot of action! And because this is very much in line with the trichotillomania therapy we offer, this truly speeds up the whole recovery process.

However, where most children are often very action oriented, it sometimes is also a challenge to find out from them what is really going on with regards to hair pulling behavior.

That is because children will sometimes (with good intentions) give  a ´social desirable answer´ when we start to discover with them how they do trichotillomania – the structure of it.

So I might ask them when they pulled out their hair the last time, and they might say 2 months ago, where it actually happened only yesterday.

And so it becomes crucial to be very alert of the congruence of their total communication (verbally and non-verbally) when offering treatment for trichotillomania to children and not go by their first verbal responses.

Because once you understand the pattern of the behavior for the individual person, changing that pattern becomes relatively simple when you know how to go about that.

Meaning: most will not pull out their hair 24 hours a day, but at certain moments and sometimes more than on other occasions.

And finally it is important to verify that the child itself truly wants to overcome trichotillomania and is not simply carrying out orders of a loving parent.

The gift of providing treatment for trichotillomania to children

But the beautiful and grateful part in offering treatment for trichotillomania to children is that help can be offered at an early age.

Because children will quickly make ‘funny’ remarks when they discover that one of them has a ‘strange‘ behavior, which can quickly turn into bullying.

This will not only be difficult for the child to deal with, simply because it doesn’t know how to stop hair pulling / to defend itself, but also for parents and bystanders who don’t know either how to help the child to stop with this behavior.

So the quicker children can learn how to stop hair pulling, the more emotional and physical suffering can be prevented and the quicker they will be able to fully enjoy this important and often beautiful phase in their lives.

« Previous Post Learning how to stop hair pulling: bye-bye powerlessness & embarrassment – HELLO NEW ME! Next Post » EFFECTIVE TRICHOTILOMANIA CURE: inspiring message for those who have not found it yet!