How to stop compulsive hair pulling? Treatment for Trichotillomania provides cure for people in need. Blog post by someone who overcame hair picking and inspires others to stop pulling out their hair too.

Any form of cure, therapy or treatment for trichotillomania start with facing the problem that is.

“Because when you have a problem there is nothing you have to do initially.

Rather there is something you need to know first“. A remark I have read somewhere once and have always remembered, because I think it is true.

I came to the realization that pulling out your hair is becoming a very serious problem when you can no longer hide it for yourself or the outside world. Or can no longer ignore it because you start to realize how it is holding you back and limiting you to fully enjoy and explore life.

It was at that moment when I I fully realized myself the negative impact of compulsive hair pulling in my life. I had reached a stage where the bald spots on my head became so visible that I had to start wearing a scarf around my head, so others could not see them.

But also at home I reached a level of ‘having to pull out my hear’ that was so strong that I started pulling out hair in the vicinity of other people. Something I had not done before.

When I was sitting behind the TV or behind the computer with people around me I started doing it. The urge for having to pull out my hair became so strong that I now also had lost control in those situations.

Self-cure, self-therapy and self- treatment for trichotillomania: a fight I could not win!

There were many things I had tried before and struggled with as a kind of self-cure, self-therapy or self-treatment for trichotillomania.

One of the first things I did when I realized that I had a problem with trichotillomania in my life was to search on the internet for any helpful insights on compulsive hair pulling. The information I found about trichotillomania and treatment for it made me feel rather miserable.

On forums I red long messages, discussions and kind of personal diaries of people who also pulled out their hair. And I had to look at awful pictures of girls with hardly any hair left on their head as a result of Trichotillomania. Wow, seeing those pictures indicating what would happen if I carried on were very confronting to me!

But also reading the sad struggles of similar people fighting Trichotillomania in their life and not understanding why they did what they did and also not knowing how to stop pulling out their hair.

A similar fight I had with myself every day!

Today would be the day that I would stop pulling out my hair, if I only knew how!

Day in and day out I would tell myself that today would be the day that I would finally stop pulling out my hair. The desire was there, reality was that I simply did not know how to do that. Because it seemed that I was very much out of control at moments I pulled out my hair and it did not really matter what I had told myself before.

So needless to say I always felt very disappointed with myself after seeing a whole pile of hair on my pillow after each hair pulling session, despite my previous good intentions to finally overcome this hair pulling disorder.

Often I had been pulling my hair for hours in a row, without consciously realizing I was doing it in the moment. At those times it felt as I was no longer belonging to this world, like I  found myself in an imaginary safe kind of bubble.

Over the years I have tried many things to stop the hair pulling. For example, I tried cream on my hands, so they would become slippery and it would be very difficult for me to grab the hairs I wanted to pull out.

I also tried wearing gloves on my hands, hoping that would make it difficult enough and prevent me from pulling out my hair.

I even considered to completely shave off all my hair, so there would simply be no hairs left to pull for me.

But nothing really worked to help me to stop and so I became kind of clueless how to stop my hair pulling behavior.

Maybe I did not have enough endurance or maybe I wasn’t doing it the right way. I sometimes felt hopelessly lost in my fight with Trichotillomania.

Trying to accept this hair pulling disorder, would that provide treatment for trichotillomania – cure?

I was definitely interested in finding a cure – treatment for / of Trichotillomania. But then I read a small book about this hair pulling disorder in which a woman described how things became worse.

So I decided to do it differently than this woman. I would accept myself just the way I was. With or without hair!

Meanwhile my life continued without any other complaints. In essence I enjoyed my life, did great things, traveled regularly and made new friends along the way. I also had built up quite a collection of scarves and other things to put on my head, telling myself that wearing these was kind of cool!

I also told myself of another advantage I could think of as long as I just accepted Trichotillomania as part of my life: no longer having to spend money on the hairdresser.

It seemed that I was quite good at the time in convincing myself that I was actually happy with Trichotillomania in my life and did not really needed treatment for it.

My breakthrough moment for considering professional therapy as treatment for trichotillomania came when I finally stopped lying to myself. What helped to reach that stage was that it became easier for me to talk about my hair pull disorder.

For example: someone would ask me why I was constantly wearing these scarfs around my head. When I told her that was the result of me pulling out my own hair and trying to cover that up, initially she was amazed.

But at the same time also very understanding and supportive. What I noticed when I started sharing this hair pulling habit with people is that the majority did not think of it as strange or weird but actually felt very sorry for me in my never ending struggle to overcome it. 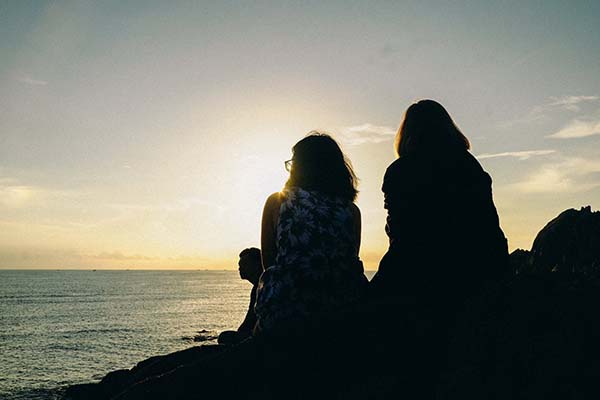 One day I told a friend that I had decided to fully accept this hair pulling behavior as part of my life, even if it meant I would become completely bald.

I expected her to support me in that decision, but what happened was actually the opposite and everything I needed to turn my situation around.

Because she simply did not accept that statement. Instead she confronted me with the facts and consequences.

How this behavior limited me in all kinds of ways and then she made me realize something very important by saying these words:

”You are a slave to your problem”, she said. ”Maybe there is no solution for it and maybe there is. You haven’t seriously tried everything yet and you are just giving up hope! It is clear that you can’t overcome this on your own! Why don’t you search for any professional help? ”

Good question. Why wasn’t I searching for any help? It would not be the first time that I would ask for help in my life for something. But this topic was so different. A kind of self limiting behavior that I could not explain.

Before I allowed myself the opportunity to find professional treatment for trichotillomania, I started to make up excuses to overcome this hair pulling disorder.

Examples of things I said to keep myself stuck at the time were:

Turnaround moment to actively start searching for treatment for trichotillomania – cure for it!

The more I came up with logical reasons why I should not actively start looking for help, the more I started to feel a like loser. Someone who was fooling herself and was paying the price for it. Because deep down inside I realized that what my friend had told me was very true.

I had become a slave of this hair pull disorder and was suffering from it. Both physically and emotionally I was paying the price by ignoring what was truly going on. It negatively ruled my days and with that my whole life.

Which was very painful because I am the kind of person who likes to have control. I felt captivated and restricted by this hair pull disorder. I realized I was not living my life to the fullest and copped out of even something simple to enjoy as cycling with my hair loosely waving in the wind.

It was clear to me that everything that I had tried thus far had simply not worked. And that staying where I was could no longer be an alternative if I wanted to overcome Trichotillomania.

I had to become active again and find an alternative way if I wanted to change this for good. I had to try something new, anything, because this behavior was holding me back in life.

And in that instance I realized that I always have a choice. Listening to the reasons that kept me where I was, or opening myself up to new reasons that allowed me to move forward and improve my life.

I choose the latter, and that made all the difference for what followed later on!