How to stop hair pulling? Treatment for Trichotillomania provides therapy. Blog post by someone who overcame the urge for pulling out hair with help and now inspires others to overcome this too.

Hair picking had been a big part of my life and the first challenges after the completion of the trichotillomania therapy were already presenting themselves when I came home.

Normally I would almost always be involved in pulling out my hair when I was watching TV.

Kind of automatically. The two activities seemed to belong together.

I came home, put on the TV and watched a program. I was sitting quietly at the couch. Took a cup of thee. Drank it. Chocolate with it. And just watched TV.

The urge for pulling out hair was suddenly gone that used to be there before the trichotillomania therapy!

Then I still thought: ‘hmmmm…. would I normally not be busy with pulling out hair now as I used to before the trichotillomania therapy?’ ‘I don’t feel the urge now for pulling out hair!’.

The answer was ‘yes, normally I would have been involved in pulling out hair when watching TV´ and ‘no, I don’t feel the need to do so at all now’

I was kind of effortless. Apparently something had changed in my subconscious through the trichotillomania therapy which allowed me to easily watch TV. The urge for pulling out hair was simply gone.

Actually I did not understand this at all (how did he do it?), but it felt good. I did not have to know exactly how it was possible. The techniques and exercises were working.

Something had changed in my system through the trichotillomania therapy that apparently had changed my previous pattern of behavior. I watched the program on TV and went to bed.

The next day after the completion of the trichotillomania therapy I had an itch on my head and wanted to scratch it. 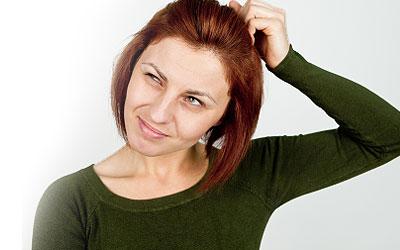 I realized I would be in the right position when doing this for pulling out some of my hairs at the same time, the way I used to do before.

There was a moment of hesitancy but then I remembered I had overcome the urge for pulling out hair. Effortlessly I scratched my head, straightened my hair ribbon and continued with what I was doing.

I was pleased with this, but I also thought: ´If only I had done this earlier in my life´! Then I would have saved myself a lot of trouble and would not be as bald as I was now.

But I also realized that the most important thing was that I had learned to overcome the urge for pulling out hair through the trichotillomania therapy. It was useless to consider if I should have done things earlier or not.

Things were the way they were and I could not change anything about the past. Now there was a new beginning. That was everything that mattered.

With me it took 9 years before I dared to start searching for help to overcome this hair pulling disorder, but I also know that some people who suffer from trichotillomania are fighting themselves for much longer.

If you are one of these people and reading my message, I want to tell you that it doesn´t matter how long you have suffered from hair picking!

Because what is most important when you suffer from an irresistible urge for pulling out your hair is to believe in a life without hair picking.

That you can overcome trichotillomania when you want to. You must trully start and keep believing this  to set yourself free from this compulsive behavior.

Unfortunately that is not always easy. Especially when you have tried many things already or have been suffering from this hair pull disorder for many years. For those of you, I have written this special message about my personal experience.

Because I truly believe now I have learned how to stop hair pulling that no one has to suffer from trichotillomania as soon as they make up their mind to overcome it!

« Previous Post SELF-TREATMENT METHOD for trichotillomania THAT DID NOT HELP me any further but costed me dearly! Next Post » REVEALING INSIGHTS ON EFFECTIVE TRICHOTILLOMANIA TREATMENT – Just released!